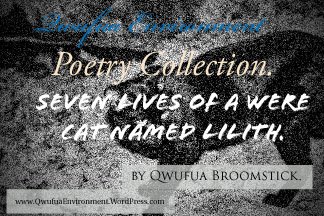 Annabelle was a black and white cat,
Mother to Lilith (I) and the current Lilith (II),
Annabelle lost his son-Lilith (I), to a religion nut case kind of guy,
By the time Lilith (I) died,
Six months never passed,
Annabelle was pregnant again,
Giving birth to black cats, few were grey,
As always friends and colleagues flocked,
Just to have the opportunity to own this dark creatures,
Therefore I remained with Lilith (II),
Born on December 11th, 2017.
Now Lilith (II) is a female,
Unlike Lilith (I) who was a male.
Annabelle was born on December 10th 2013,
Lilith (II) has never given birth to black cats,
In spite herself being a black cat,
she is the one on the cover photo of this story,
When near death, she must procreate,
A pure black cat,
That I will name Lilith (III).